Pediments, paneling, and parquet —  whether period authentic or a later pastiche —suggest to many people that the furnishings should follow classical suit. Interior designer Bruce Budd is not among them. To him, even the most traditional architectural envelope sings when outfitted with “a confidant mix of history and contemporary design,” a melding that speaks of today while — being enriched by the past.

Proof of this well-rounded philosophy is a chic house that the Manhattan-based Budd decorated for a businessman in Houston’s plush River Oaks enclave. The five-bedroom dwelling was completed in 1933 by John F. Staub, the Texas architect who peppered the state with residential masterworks such as Bayou Bend, a Houston mansion that was built just a few years earlier for oil heiress Ima Hogg and her brothers and is now one of America’s leading decorative arts museums. Though more modest in scale, the address that Budd took in hand is equally appealing: a café-society evocation of a 17th-century English redbrick manor.

Staub designed the house so that its rear façade is oriented toward the street, a conceit that keeps the main entrance secluded while a parklike expanse of lawn offers curb appeal. The architect also punctuated the structure’s public side with a scrolling central gable—echoing one he’d admired on a trip to England in 1929—and clipped a small iron balcony to the second floor like a lacy brooch.

The interiors spark a similar frisson. Despite the home’s Georgian-style cornices, Louis XV boiserie (added by the previous owners as part of a ’70s expansion), and abundant antiques, an up-to-the-minute swagger prevails. In the entrance hall, for example, a swirl of blackened steel by sculptor Beverly Pepper tops a robust marble console from the 1800s. “Early on I imagined a modern mix—perhaps a Jean Royère chair or two and handwoven raffia-and-cotton carpets,” says Budd, best known for his association with the late heiress Bunny Mellon, for whom he worked on houses from Cape Cod to Antigua. 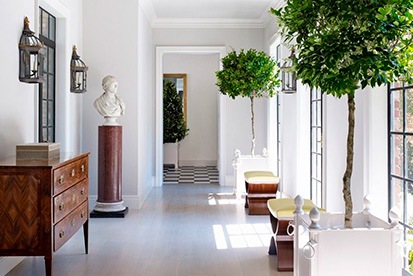 Pediments, paneling, and parquet suggest to many people that the furnishings should follow classical suit. Interior designer Bruce Budd is not among them.

Since establishing his office in New York in 1985, Thad Hayes has become one of the most sought-after young interior designers. Axel Vervoordt began purchasing antiques in his teens and has steadily built a vast collection of exquisite objects from around the world.